i may just stop listening to those guys at the fancy condiment store, because this is the second time they’ve led me astray, re: hot sauce (i will grant that their balsamic vinegar and truffle oil counsel has been sound, but now they’ve offended in equal measure to their previous aid). the first was with this Montreal Road Kill Sauce, which i was assured was goodly spicy, but not to the point of eclipsing its distinct flavour. what i discovered upon taking this flagrant pretender of a hot sauce home was that i had paid 7 bucks for a bottle of weak ass sweet chili sauce. this prompted, discernible amidst a steady stream of epithet and contempt, three questions:

1. what exactly would one expect a “Montreal” hot sauce to taste like? particularly one with a roadkill theme? the label graphic (forthcoming, sorry for the lack of immediate visual aid) suggested that it was perhaps a sauce the boldness of flavour of which could be relied upon to mask the presumably unfortunate taste of roadkill (as opposed to a sauce tasting like roadkill, or a sauce which in its fiery onslaught one would be reduced to a state of grotesque brokenness and splayed entrails comparable to roadkill, either of which would have been preferable to the tepid and uninspired treacle offered), but unless the roadkill in question was some pad thai that a porcupine was in the process of stealing when it was run down, it hardly lives up to its premise/promise. 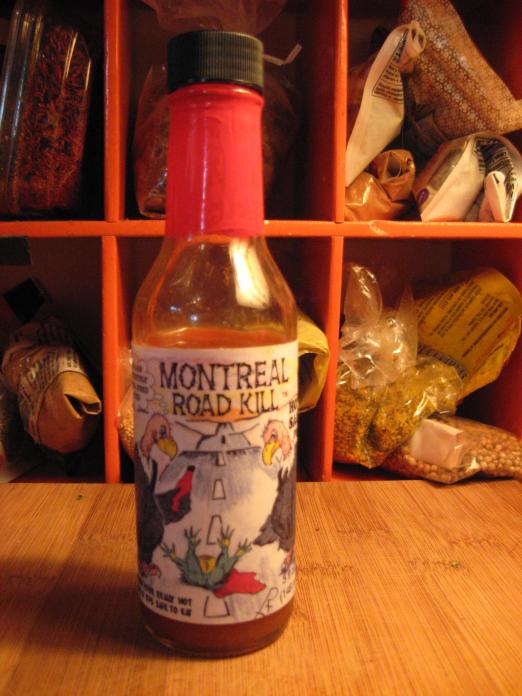 so yeah, Montreal hot sauce? pepper? rendered pork fat? maybe something that combines pork fat and maple syrup, in a spicy reinvisioning? that would’ve been nice, unanticipated, even unprecedented. (but no).

3. why is it bottled in Florida or wherever the hell? (actually, i can’t remember where it’s bottled, because i don’t have it right in front of me, but i can vouch for it not being Montreal) in fact, what if anything does this sauce have to do with Montreal other than the name? why is Montreal hot sauce just ersatz thai sweet chili sauce for babies? who did this? why did i pay seven dollars for it?

what was i even talking about?

in Everyday Drinking, Kingsley Amis talks a lot about the “metaphysical hangover,” the often more detrimental to one’s capacity for pleasure and self-worth sibling of the physical hangover – with which i’m sure we’re all familiar, yeah? yeah? yeah, anyway, today was one of those lucky days when you wake up, or wander into shortly after waking, the emotional inversion of such a soul-crushing consequence of Too Fine a Taste for the Excess of Things In Life. anyway, what? feeling good. the sublime hangover, where you still feel like someone poured a bottle of vodka all over your brain and the nerves in your teeth, but you’re surfing, in lieu of sinking in, the void. where the light just seems a little brighter, although not oppressively or aggressively so, and the withered outer veil of the flesh has been torn away, leaving you revelling in the beauty and serenity of the Real World like some skinless, gibbering abomination..