Another day in the uncanny valley. w/ @prsrvtnsociety
Naissance des pieuvres.
Jazzed on my @molassesbooks shirtttttt, if you’re ever derping around Bushwick and want to read a book and drink a damn beer, you should hit them up.
cf: Three Women // Tre Dame 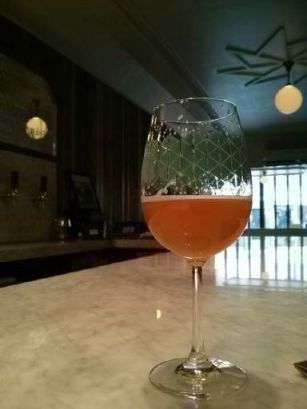 Hangovers are funny things. In all of the usual laughingly lamentable, mind-stripped-bare-by-its-bachelors-even, sorts of ways, but also in how they present an opportunity for uncontrolled experimentation with ways of feeling – ways of feeling badly, yes, but sometimes involving new plains of badness, ways of being a body that foreground one’s corporeality with terrific and – if we’re lucky – fascinating immediacy.

What I’m thinking of right now is the consequence of a late development in my drinking life, my intense interest in weirder, wilder, (especially sour) beers, and to a lesser degree, the same (minus the sour) in wines. It is perhaps best described as waking up with the immediate feeling of a balance having been tipped, as if your body is not poisoned but occupied – become home and host to the microflora of wherever, Vichte and the Zenne, Anchorage or Greensboro Bend. There is a taste that seems not so much to linger in your mouth as be produced at the source, in your very saliva; it reminds you of all that you have taken in, drink upon drink, and inspires the suspicion that some perverse innovation in the typical food-to-energy equation might have been achieved, like an internal ferment has begun that might finally coax the self-identity of the flesh out of its jingoistic discretion. Like you might be taken and changed (I mean, we’re so much provirus already, I should think the ol’ human microbiome is just waiting for an opportunity to jump the rails and go all Brundlefly).

The second most recent time that I experienced this (come to think of it, I suppose I wasn’t even hung over yet. Jesus.) was a few Sundays back, after an fully engaged afternoon at Tørst, the Evil-Twin-affiliated Brooklyn beer bar helmed by Noma/Momofuku/Fat Duck alumnus Daniel Burns, and frequented, I discovered, by the kind of magnificent, munificent bastards with whom one can slide into that easy camaraderie founded solely upon the mutual enthusiasm for cool beers.  We (my newly acquired cohorts and myself) had all sorts of absolutely brilliant shit – Bayerischer Bahnhof‘s Pineus Gose (lautered over pine needles), Stillbow Oxtisanal (aged in blueberry wine barrels, which against all odds was wonderful), Crooked Stave’s Surette Saison, Evil Twin & Westbrook’s Justin Blåbær blueberry Berlinerweisse (also improbably excellent, in spite of the recurrence of blueberries), Tart of Darkness (sour stout!) – but by nightfall I was starting to feel that my already debauched constitution (it was Sunday, and I was on a “working vacation”) mightn’t be able to withstand even so pleasant a bacterial onslaught.

To provide a little context for the above ravings, one of the more exciting turns the international craft beer world has taken in recent years is the renewed interest in wild and ambient environmental yeasts, coupled with experiments in barrel-aging. Both are strongly associated with the Belgian tradition; while we have Pasteur to thank for elaborating the mechanics of open fermentation and laying to rest the idea of spontaneous generation (although ironically, pace Bruno Latour, in the process spontaneously generating a world of microbes around us), pre-Belgian Low Countrymen  had been fermenting beer in open vats, aging them in empty wine barrels, and letting all sorts of weird-ass bacteria get involved since the 1500s. Now you have all sorts of craft and kvlt breweries eager to experiment with the old traditions, combining a venerative and curatorial spirit with an almost postmodern iconoclasm (local notables including Dieu du Ciel, Trou du Diable, Hopfenstark, and Toronto’s Bellwoods, among others), and coming out with some fantastic beers. It may be pure biophilia (or biofetishism?) to say that these beers taste especially lively, because it already takes a certain orientation toward the messiness of life for descriptions like lactic acid, horse blankets and farmyard to come off as “lively” (as opposed to, say, foetid) in an aromatics context, but blast, I have such an orientation, and these beers have such a taste. And after a full afternoon of them that Sunday – the classic Belgians and their bastard diasporic interpretations alike – I was beginning to feel as if the tastes were tasting me.

Fortunately, my next stop happened to be a quiet little bar attached to a young distillery, where they have pink gin on tap, a gin named after Dorothy Parker, and a cocktail called the fucking CANNIBAL CORPSE REVIVER Nº 2 (which I didn’t try, however, because it is tall and I do not drink tall drinks out of a fear, perhaps, of going soft). They also produce an excellent take on a jenever tasting so smartly and directly of rye that one wonders if whisky might not actually be the best (liquid) expression of the grain. As I might have guessed, the administration of a succession of gins and bitters was precisely what was required to scour my insides and restore some semblance of order to the micro-flora and -fauna of my body, so that in short order I was feeling so much less yeasty and invaded, so merely human that I could have sang a song. The incumbent ontological hangover pre-empted by the more familiar and conceptually un-challenging regular hangover. Good old gin.